This is an update as I continue to iterate on my design for a non-player character stat block format for. As previously discussed a few times. Here we have Lyrum, stated up in version 4 of my NPC stat block: 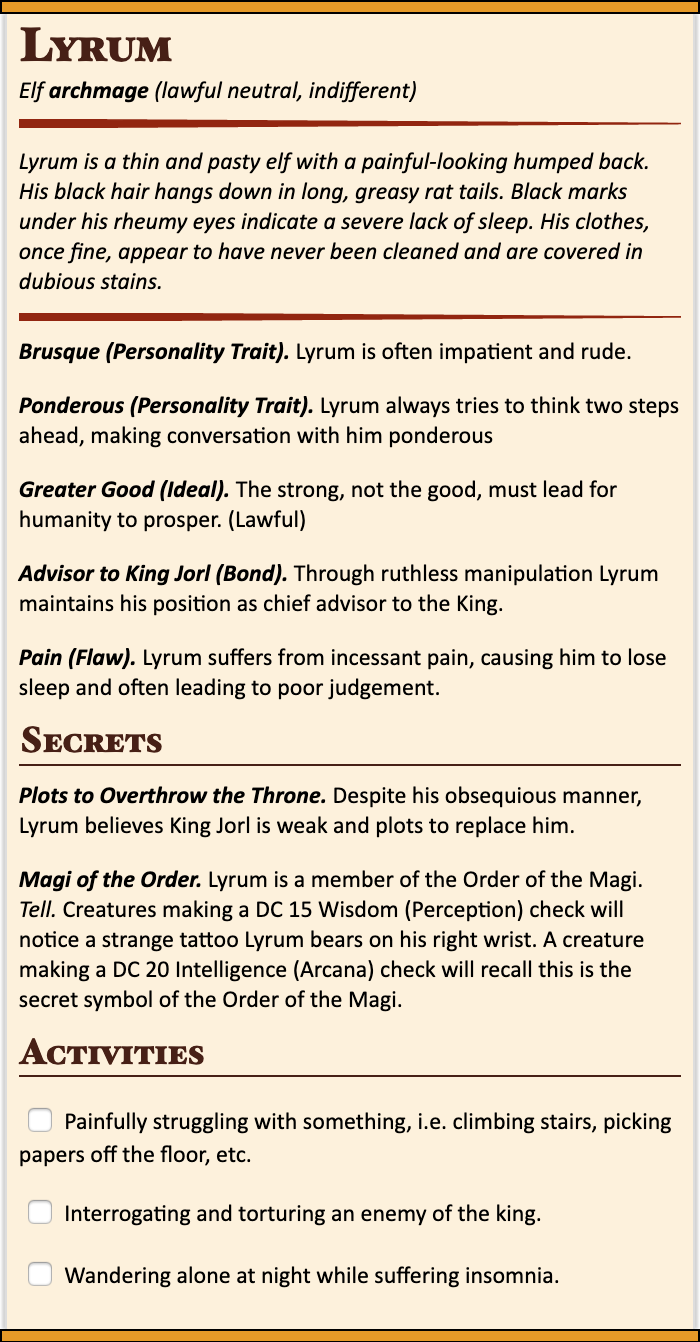 As with the monster stat block, the header contains the name and a brief summary of the NPC:

Race and alignment are pretty self-explanatory. The NPC header also adds the stat block (in bold) and starting attitude (in brackets) of the character.

The stat block references the monster stat block the NPC would use in combat. This would normally be a NPC stat block from Appendix B in the Monster Manual. Here, Lyrum uses the statistics for the archmage. While roleplaying him use the NPC block above. If the party decide to attack him, use the archmage stat block for combat.

The NPC starting attitude is a reference to the social interaction rules from chapter 8 of the Dungeon Master's Guide. I use a lot in my own campaigns. You could argue this duplicates the information in alignment. Evil characters would be hostile to good characters, and vice versa. While neutral characters would always be indifferent, and so forth.

After the header follows a block of read-aloud text describing the NPC as they might appear to the PCs:

This section should also include the all-important distinctive features of your NPC. These are the memorable, visual cues that separate them from the (many) other characters in your campaign. This allows your players to place them even if they forget their name (as they often do).

Following the description are the NPC's personal characteristics: 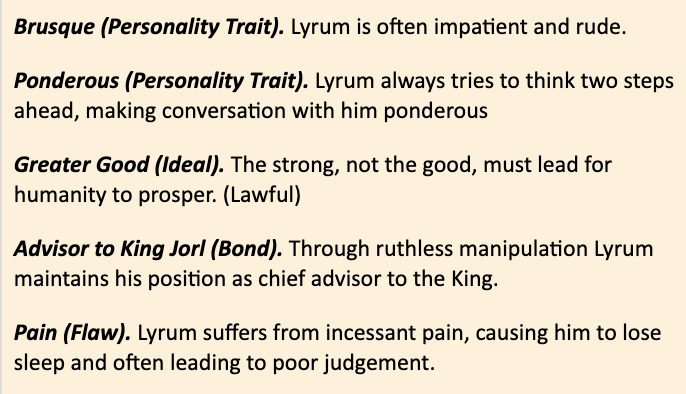 Personality traits serve two purposes. Firstly, they tell you how to roleplay the character. They can also act as secondary distinctive features (my players never forgot the old wizard who sneezed all the time).

The bond is important because it tells you the role the NPC will play in your campaign. For most NPCs this is their day job. Is the NPC a simple town guard, constantly raining on the party's parade? Or, in the case of Lyrum, a ruthless manipulator the party can't quite trust?

Ideals and flaws give you something to tell your players when they Insight an NPC. Again, in the rules for social interaction in the DMG in-sighting a flaw or ideal can give you advantage on a Charisma check. Or disadvantage, if you get it wrong.

(It's worth noting a few optional rules in the DMG refer to personal characteristics, like the rules for Morale)

I also preface each personal characteristic with a short, descriptive names so that DMs can get a rough idea of an NPC at a glance.

After the personal characteristics is the Secrets section:

All good NPCs have something to hide. Secrets are the mysterious elements of an NPC: the hidden agendas, shady pasts and foul allegiances. They give an NPC depth and highlight to a DM how they could be used beyond simple interactions.

At first secrets might seem to duplicate characteristics. NPCs might closely guard their flaws, ideals and even bonds. However, you don't want your players knowing somethings about your NPC simply because they rolled well on an Insight check.

Some secrets have a tell: something about the NPC only perceptive or knowledgeable characters might notice. Other secrets may only be uncovered through play.

Lastly, is the Activities section:

Activities are the everyday things an NPC might be doing when the party encounters them. For example, the first time the party encounter Lyrum he's having difficulty picking papers off the floor. The party might step in to help, only to irritate him even more. Next time, they find him wandering alone at night, sore with insomnia.

This is the section I'm least sure about. You could argue personality traits would cover this. It's a remnant of the agenda section from the version 3 stat block. Long-term agendas didn't really work for individual NPCs. In 5E a lone NPC can be resolved with a single combat or ability check, so I moved them to a new concept called fronts (more on that later).

I hope you found this useful, please feel free to steal any and all of the ideas here. All I ask is you let me know how you used them, and what did and did not work.