This is the first campaign diary for my 5th Edition campaign, The Last Post. Heavily influenced by Gary Gygax's famous B2 Keep on the Borderlands.

The Last Post is a play-by-chat game that runs every week on Roll20. The party are venturing forth from the forbidding Keep, into the untamed wilderness of the Western Hinterlands.

The below is an edited log from of our in-character chat channel. We've added annotations so you can follow what's going on. Please enjoy! 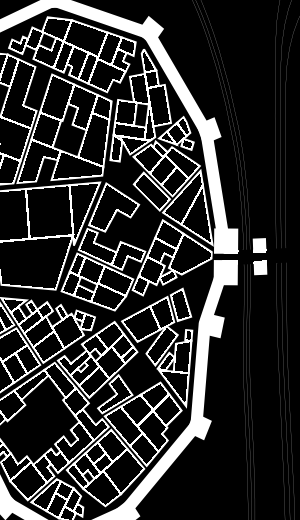 Arrival at the Keep

It is with some relief that the party spy the Keep rising between the hills that border the Western Hinterlands. It perches on a rocky outcrop. Ivy chokes its high walls, vibrant green against its grey stones.

Within its walls a pile of gables, chimney stacks, and towers huddle together. They rise in a steep incline to a forbidding fortress.

A stone bridge ascends to a gatehouse, spanning a treacherous ravine.

Flint
looks up at the giant walls..quickly checking his seeming in a little mirror he keeps on his person.
Alic

hobbles up to the bridge. short and scruffy. Limping on his left leg. Grumbling terribly

The campaign takes place in the Western Hinterlands, a heavily-forested wilderness that sits at the western edge of the Low Kingdoms. Ages ago the kingdoms of the Hinterlands, lead by the ancient lords and ladies of House Brer, fell to the chaos creeping from the west.

Once abandoned, the Keep has been reclaimed by the lords and ladies of the Low Kingdoms as a foothold into the Western Hinterlands.

Chris (he/him) says Alic (he/him) is my character, a grumpy old man with a busted leg and small man syndrome.

Liam (he/him) says Flint Barkfrost (he/him) is my character, an exiled fairy knight. He is magically disguised as a mortal.

It's awfully big isn't it? Something about it...

shakes their head and doesn't continue.

Strik
Full of all sorts of... interesting people. I'm sure.
Alic

pushes past Strik and Flint.

Get outta me way.

grumbles and stumbles forward a bit.

rolls his eyes at Alic.

We should find an inn.

Liam says, Do you all already have factions?

Morgan says, Not me, no.

Chris says, I don't think I have. I was leaning towards the darker side of the Mercies.

The Last Post makes heavy use of the rules for player factions in chapter 1 of the Dungeon Master's Guide.

These are summarised as follows:

Merciful Company of the Cerulean Swords (Mercies). This infamous company of mercenaries has been exiled for a crime (they claim) they didn't commit. They bide their time accepting any old contract in the vain hope they can one day restore their tattered reputation.

Royal Society of Magic.The magicians of the Society are permitted to practice magic on the condition they govern its use. They keep a wary eye on hedge practitioners and capture or kill those who use ruinous magic.

Wardens of the West. A century ago the wardens vanished. Now they have returned to preserve the Old God's claim to the Hinterlands. They guide those who travel through the wilderness and watch for threats to the natural order.

The party make their way across the steep bridge. With the sun directly above them, its flagstones blaze with heat.

The gatehouse here stands over the ravine. A crow's cage hangs from the outside walls containing a corpse, blackened by decay. The rushing of water can be heard far below.

Beneath a precipitous drop falls beneath the gate house. Beyond, another stone bridge spans the rest of the gulf to the Keep itself.

A solitary guard slouches here, sweat covering his brow. He stands up as the party approach, a hard look on his face. Behind him the gates stand firmly shut.

I don't know you.

Just travellers, weary from the road, hoping to rest for an evening or two

Sorry for the bother.

Alic
glares up at bailiff, irritated.
Alic
The Queen of frikin' Sheba, what's it to you? Lemme in so I can sit.
Bailiff

Settle down, I need your names first.

Bailiff
wipes his brow with his sleeve.
Flint
does a small bow.
Strik

nods their head to Bailiff.

I am Strik, ser bailiff.

Liam says, Do we have a mission? Or like a task? Or are we just here to make our fortune? Or just passing through?

Ric (the DM) says, Whatever you would like, it's a sandbox so it's very much open to you.

Liam says, Okay I haven't told the group but Flint is here because he's heard the magic society will sometimes protect magical creatures... It's a rumour he doesn't know how truthful it is.

nods, but seems unsatisfied by the answer.

And what is your trade here?

Come on, speak up!

looks to the other two quizzically.

Strik
waits quietly for the others to answer first.
Alic

He moves so close to Alic, you can smell his foetid breath.

What did you say, pal?

While the gods remain silent, their faithful are anything but. The Low Kingdoms are filled with acolytes, priests and zealots of The Holy Temple. They stand on city streets scolding the masses, or wander lonely roads looking for converts.

The Temple is the all-powerful instrument of the New Gods, the Mother and the Father. It is a massive institution that crosses national boundaries and has its fingers in nearly every aspect of common life. No other faiths are tolerated, and even kings must bend their knee to the Hierophant.

raises an eyebrow to Bailiff.

You think if i was any of those id just say it? By the Father, I'm a crippled little man, tired and thirsty trying to get in. I have no special work due to this...

motions to his leg.

Now for the love of everything please may I pass. Standing still is the worst.

Bailiff
pokes Alic in the chest.
Alic
Get ya' mangy hands off me.
Bailiff
You only enter by the authority of the Castellan.
Alic
grumbles under his breath.
Bailiff

starts to clench his fist around his poleaxe.

Alic
bows Thank ye muchly.
Flint
I am sorry, ser... this poor cripple has been travelling a long time and has become irritable... he didn't mean anything by it.
Bailiff

I'll ask you one more time... what's your business here?

Because you ain't manual labourers.

Flint
I am looking for any kind of work... fetching, labouring, grunt work if you will.
Strik

Ser. We do indeed seek work. Of whatever kind if available. I also seek word of my family.

rolls eyes. I don't know these well, I'm lookin for a chance for coin. Nothin for a cripple out there is there. I'd be more like food for somethin else.

looks you over carefully, considering.

I'll need to search those bags and packs first.

Alic
lifts arms Ain't got anythin' someone else wouldn't.
Flint

opens his bag and removes his dagger.

Alic
turns round and mutters obscenities under his breath
Flint
shows the guard.
Strik
un-slings their pack and offers it over.
Bailiff

You'll need to stow those weapons whilst you're 'ere.

starts riffling through the bags.

The Castellan takes a tithe, mind you. Anything over five score crowns, she takes one score.

Not that you lot have much coin to your names.

Bailiff
slings your bags back at you.
Strik
We are modest folk.
Alic
rolls eyes again, clearly not listening to this prick.

eyes Strik and Flint up and down, sniffing the air suspiciously.

You're sorcerers aren't you? Tell me.

Strik
What is a sorcerer, ser?
Alic
pauses a moment and tilts his head to listen.
Bailiff

You better not be lying. All those who practice must report to the Royal Society of Magic.

points to a tall tower poking above the rambling roofs of the Keep.

Flint
Thank you for all your help.
Strik
You are wise, ser.
Bailiff
reluctantly opens the gate for you, signalling to the main gate to raise the portcullis.
Flint
moves on eyes often drifting to the tower.
Alic
trudges passed Bailiff still muttering under his breath.

As you pass, he leans forward over Alic, standing far too close again.

points to the crow's cage.

in a very put on accent.

Strik
pulls their dagger and sling from their belt and tucks them into the pack as the bailiff returns it.
Alic
Jumped up.... i coulda.... 'e asn't a clu.... prick.
Flint

Sooo... shall we just head to an inn? any clue where we might actually find work in this place

looks a little dumb struck with the scope of the keep.

Strik
resettles their pack on their shoulders and follows along quietly.

The party make their way across the second bridge, into the Keep itself.

As they approach they hear screaming, shouting and booing. They find themselves in a small square where all, wooden stake stands.

A platform has been constructed at the base of the post. A chopping block stained with blood sits atop.

An execution appears to be taking place. A crowd of peasants has assembled and are booing as a burly executioner drags a monk onto the platform.

The monk
PLEASE, HAVE MERCY ON ME.

A barrel chested man with a bushy, black beard and a bald pate appears to be supervising. He wears an eye-patch covering a nasty looking scar.

looks up with a grim smile,

Strik
What gives you that idea?
Alic
Notin'. Notin' at all.
The monk
PLEASE, SPARE ME.

The executioner drags the monk kneeling in front of the chopping block.

The burly officer nods, and turns to the crowd, waiting for the shouting and booing so subside.

On this day, the first of Summer, I, Lieutenant Gyles, Commander of the Bailiff, do hereby sentence this man for the crime of heresy.

Seeking to subjugate the forces harrowing their borders, the nobles of the Low Kingdoms have stationed a skeleton force here, under the command of Countess Erys of House Graye. She cares not what happens within the Keep, provided her laws are not broken.

By the order of the Castellan of the Keep, Countess Erys of House Graye, the laws are as follows:

Pay the Tax
No Killing
No Stealing
No Adultery
No Witchcraft

Gyles
This post has stood for centuries, as does the the law of the Low Kingdoms. The rules are few, but the punishment is the same.

The crowd roar at this, chanting Chop him, chop him!

Gyles
Can anyone speak in the defence of this apostate?

Gyles
nods to the executioner.
The monk
NO, HAVE MERCY, BY THE MO....

There is a loud crack. A heavy thud, and the monk speaks no more. A loud cheer goes up.

shouts up with the crowd.

With the excitement over, the crowd start to disperse, happily chatting amongst themselves.

The Command of Bailiff marches off, while the executioner starts to pick up the pieces of the monk.

This gives you time to examine your surroundings.

To the south is a stables.

And to the north a crooked, three story building leans awkwardly. A sign outside proudly declares it is The Last Post.