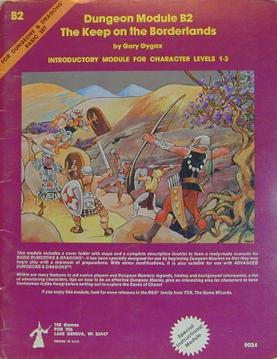 The Keep throws a long shadow over the Borderlands. An even longer one across our hobby. Scribes wax lyrical in hundreds of posts. Eyes wide with child-like wonder, teary with nostalgia. Brows furrowed, lips pursed with righteous fervour.

All writing about B2 Keep on the Borderlands.

Constantly replayed, re-imagined, and rewritten. In a way, we're all trying to get back to B2. It's Gary Gygax at his peak (probably). The world's most played adventure (I imagine).

The allure is clear: a forbidding fortress sits at the edge of civilised lands. Chaos creeps from the unexplored wilderness (problematic) beyond. Adventurers foray into the Borderlands. Returning to the self-enclosed world of the Keep. To lick wounds, and spend gold.

I mean, who wouldn't love that? Not I. So I bought Old-School Essentials, fished out my dog-chewed copy of B2, and dumped my players at the Keep's gates.

My aim: to play B2 as it was originally intended. Experience the OSR in all its glory. And gain learnings of sandbox adventures.

Illustration from B2 Keep on the Borderlands, by David S. LaForce.

A sheer wall of natural stone is on your left, the path falling away to a steep cliff on the right. There is a small widening ahead, where the main gate to the KEEP is. B2 Keep on the Borderlands. Gary Gygax.

B2 is ground-zero for the OSR. The touchstone. The holy writ. A blueprint (literally) for the OSR aesthetic. Not just an adventure. Not just a rulebook. A guide on how to play the rules. As originally intended. From Gygax's own hand. Quirky, black-and-white illustrations. 10' wide passages. Orcs. Treasure chests. Dungeons. It has it all.

Reading it feels like opening a venerable tome. An artefact of a bygone age. Where elves are rare, and dwarves retreat to their mountains. Vulgar mankind waxes as magic wanes. Where goblins are still a shocking encounter. And chaos lurks in the shadows.

The setting is a tabula rasa. Details are scant. NPCs nameless. I found I was spontaneously filling the blanks with vivid creations. The legend of the Tallow Man. The back story for the Wanderer. The mysterious sorcerer, who chewed his fingertips to the bone to power his magic.

A simple foundation on which to build new worlds. Unencumbered by spelljamers, artificers, dragonborn, and all the other baggage of late-stage D&D lore. The original micro-setting. Ready to build bottom-up, hex-by-hex.

It's Hard to be this Basic

1st-level B/X adventurers aren't daring. They're mad. Stupid. Or both. They're certainly not heroes.

You're more likely to die as not. A sleep spell can wipe out the party (without even a saving throw). Clerics can't even heal until level 2. Thief skills are so low as to be negligible. Combat is swingy, and even fighters can fall in short order.

For my players (surely for most?) agency is important. And starting characters have little. Players want to try out their new toys but they'll be misfiring most of the time. Any interaction invites instadeath. It goes without saying, this was frustrating.

Wilderness map from B2 Keep on the Borderlands.

What of Wandering Monsters?

...whatever walked there, walked alone. Shirley Jackson, The Haunting of Hill House

B2 uses a novel system for wilderness encounters, which are triggered by proximity. Lairs are dotted around the map. The closer you are to one, the likelier an encounter. For example, there is a 1-in-6 chance of an encounter 1 square away from a lair. 3-in-6 3 squares away. And so on.

It creates a sort of gravity well for lairs, drawing the party in. They might notice they encounter lizardmen more in this area. Or they might follow retreating monsters back to their lair.

It has some nice features. Now encounters have a context. A monster has a reason for being there. No need to improvise motivations or other details. But calculating proximity odds is fiddly, which is probably why it never caught on. Fair enough.

Do not make exceptions; stick to the rules, and be fair. D&D Basic Set - DM's Rulebook, Gary Gygax and Dave Arneson.

Ah Rules vs. Rulings. The battle-cry of the OSR grognard. Striking fear into the hearts of rule lawyers, power gamers, and (worst sin of all) 4E players.

This was another source of frustration for my players. Rulings seemed contradictory, inconsistent, or arbitrary (because they often were). This has been spoken about elsewhere so I'll leave it there.

Well, that's the end of the post. If you expected more, don't know what to say.