The air is hot and dry, devoid of the corrupting odours of the rolling battlefield behind me, but full of another sort of death; its promise in the very dryness of that air moving about a place where there is no water, no food, no shade.

Exploration. The first pillar of the dragon game. In a world of sprawling wilderness, remote settlements, and howling wastes, travel plays an important role. Emphasising the sheer vastness of the world. The isolation of its remotest parts. The mysterious lands that lie beyond your crude maps.

Yet, there's a catch. The first pillar of Dungeons & Dragons is in disjunction with its core genre: heroic fantasy. Characters can fly across battlefields, shrug off dragon flame, and return completely healed the next day. They're not going to be troubled by long journeys, sleepless nights, biting mosquitoes, or even the odd blizzard or two.

My previous attempt at journey rules fell into this trap, assuming I could effectively drain the party's resources. Taking another tack, I've adapted and simplified the journey rules from Adventures in Middle-Earth:

The party determine their destination and the route they're taking. From this, the GM determines DC for ability checks related to journeys (including saving throws, journey checks, etc.), as with any other ability check. Terrain and peril should be the main factors.

Players make a number of journey checks during a journey. This is a group check, using optionally the Investigation, Perception, Stealth, or Survival skills.

The party make a journey check to determine their starting disposition as they set off.

If they fail the journey check, the journey starts poorly. Perhaps the party are under-supplied, perhaps dark forces are aware of their departure, or perhaps drab weather sours their mood. If they fail, they must make a Constitution saving throw or gain a level of exhaustion.

Similarly, if they succeed, the journey starts well. Perhaps the weather if fine, perhaps they leave under a good omen, or perhaps they manage to slip away without being noticed. They all have advantage on their next journey check.

During the journey, the party may run into a number of encounters. How many depends on the length of the journey:

Illustration from B2 Keep on the Borderlands, by David S. LaForce.

Finally, when the party reach their destination, they must make one, last journey check. If they fail, they must each make a Constitutions saving throw. Again, the DC is determined by the terrain. If they fail the saving throw, they gain a level of exhaustion. Perhaps they arrive late, or turn up hungry and tired.

This is a random encounter table adapted from a region in my home campaign, The Last Post. I've widened the concept of encounters to be less combat-orientated. New encounter types include unexpected locations, obstacles, hazard, hunger, thirst, and weather. This means you don't have to track things like weather conditions, resources, and even where the party are, precisely.

This is an example of the type of encounter I'm talking about, using my experimental encounter block format: 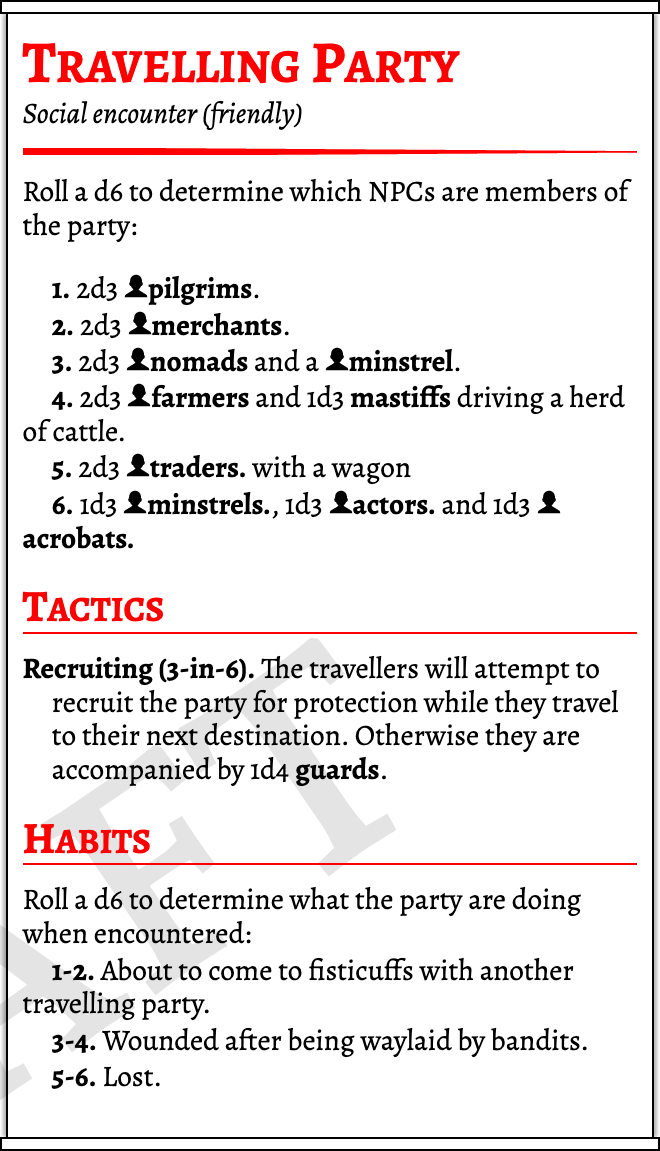 I've used group checks, a powerful but much-ignored rule. It's basically the equivalent of the 4E skill challenges, without all the faff. It flattens the chances of success with multiple rollers, and simplifies the flow of the game, while giving each player the feeling they're participating in what is going on.

Whittling the party's resources is the trickiest part. I looked at modelling exhaustion using damage (using the abstract view of HP). But short and long rests would easily swallow any such damage.

I normally stay away from penalties such as exhaustion (because nothing sucks the fun out of the game more). Again, Adventures in Middle-Earth has some inspiration here. Many features and traits heal or resist to exhaustion.

To get this to work would require a couple of rule changes:

Some ideas for point 1 above:

I think the key thing is to ensure resources are expended to clear or resist exhaustion. Exhaustion limits certain features, particularly the berserker barbarian's Frenzy feature, so this needs to be balanced.