This is our second preview of The Grim, a darker take on humanity as presented in the official material. Previously we published our variant human race, the Grim Folk. This week, we're publishing a new background: the Bailiff. 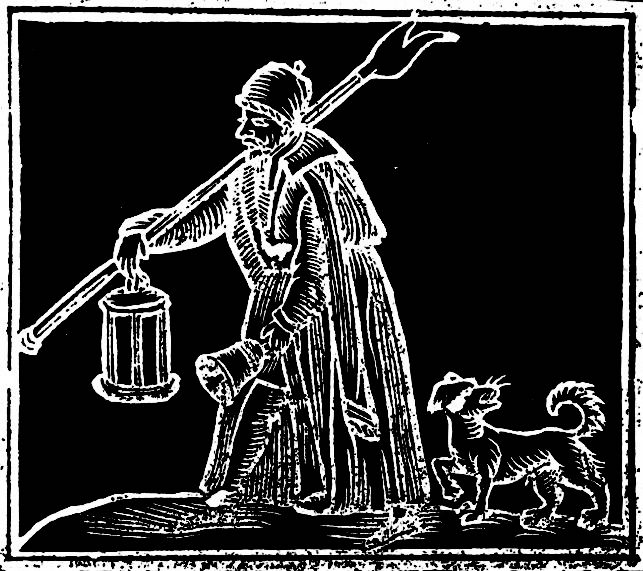 A detail from A Friend's Advice by Thomas Campion, early 17th century. Possibly 1609.

You were a bailiff, constable or lawman. A proctor for the courts, your temple or the nobles. It was your duty to arrest criminals, collect taxes and execute warrants. You might've been a member of the city watch, religious police, a warden or even a tax collector.

Equipment: A badge or warrant denoting your authority, a bag of caltrops, 5 manacles, a signal whistle, torturer's tools, a set of common clothes and a belt pouch containing 10 gp.

Your commands carry the power of your lord, lady or temple. You can invoke your authority to exert influence over commoners you encounter within your jurisdiction. You can use this power to make arrests and commandeer simple equipment and horses for temporary use.

The life of a bailiff is a hard life of violence. Enemies are easily made, and sometimes it is very like war. Use the personality trait and flaw tables for the Soldier from the Player's Handbook, modifying the entries where appropriate to suit your identity as a bailiff. Otherwise, use the following tables for your ideal and bond.

You made your living hunting down outlaws, deserters and escaped convicts for gold. Your work often took you across national boundaries, into strange lands and dangerous territories.

If you decide you were a bounty hunter, you may can choose the Fearful Reputation feature (see sidebar) instead of the Authority feature.

You were one of the men and women tasked with dealing out the ultimate punishment: death.

If you decide your duties as a bailiff included work as an executioner, you may can choose the Fearful Reputation feature (see sidebar) instead of the Authority feature. You can replace the signal whistle in your equipment package with a black executioner's mask.

If your character has a bailiff background, you may select this background feature instead of Authority

Your reputation precedes you. No matter where you go, people are afraid of you because of your reputation, particularly criminals. People are more likely to get out of your way, and minor criminals, such as pickpockets, muggers or footpads, will not molest you if they know who you are.

Stay updated with the latest products and blog posts from Grisly Eye Games. Subscribe to my low-traffic mailing list and you get a free copy of The Enchanted: