The Vermin has been released on PDF and is available for purchase. This gorgeous 11 page monograph introduces a new monster for 1st-4th level player characters as well as illustrations, adventure seeds and an example adventure.

This is a follow-up to my preview of Flawed Magic Items and includes two, new flawed magic items: The Head of St. Eras and blood brew.

Public Domain image of the Beheading of St. John (courtesy of The Met).

This grisly relic is the withered head of St. Eras, a fierce warrior of the faith. St. Eras was beheaded and martyred by the enemies of the Temple. By a miracle his head continued to speak, even unto death, so that the faithful might continue to benefit from his wisdom.

Additionally, you can confer with the Head of St. Eras whenever you make an Intelligence (Religion) check. When you do double your proficiency bonus on that check.

Sentience. The Head of St. Eras is a sentient lawful good item with an Intelligence of 10, a Wisdom of 16, and a Charisma of 8. It has hearing and darkvision out to a range of 120 feet.

The head can speak, read, and understand Common and Angelic. Its voice is gruff and masculine.

Personality. The Head of St. Eras is convinced the End Times are close and sees any omen as evidence of this. It demands complete observance of Temple Law, and if any creature bearing the Head of St. Eras breaks that law, then it will become silent and the creature loses all benefits and penalties of the head. It will not speak again until it has been attuned to a new creature.

Disturbing (Flaw). The head speaks constantly, often on portentous matters which are disturbing for those who listen. Any creature within a 30 ft radius of the head who can hear it speak is vulnerable to psychic damage. 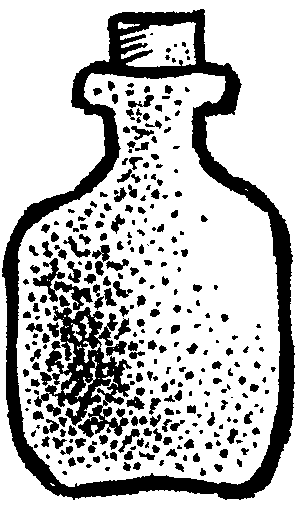 This art is by Daniel F. Walthall, available under the CC BY 4.0 license.

This foul smelling, thick, black liquid is made by the witches of the Ill North to strengthen their warriors. It is brewed from fermented blood mixed with strange herbs, and only works when drunk warm.

When you drink this potion warm you enter a blood rage and automatically attack the nearest hostile creature. Your eyes turn red and you weep blood. While blood raging, you gain the following benefits:

If you are able to cast spells, you can’t cast them or concentrate on them while blood raging.

Your blood rage lasts for 1 minute. It ends early if you are knocked unconscious.

Causes Mania (Flaw). If your turn ends while you're still in blood rage and you haven’t attacked a hostile creature since your last turn or taken damage since then, you attack the nearest creature, regardless of whether it is an ally.

I run a playtest campaign called Black Griffin and post regular diary updates on this blog. If you'd like to be notified when we publish a new campaign diary please subscribe to our playtest channel: