This is a tale of Fair Paralain, that rotten tooth of a city. It is a story of kings and princesses, catamites and fairy knights. A tale of misfortunes and gallows humour.

True Queen is a series of solo play-throughs using Fate Condensed and The Mythic GM Emulator. (To help me come up with scenes and situations). I'm using the series as a way of familiarising myself with the system, for a forthcoming one-shot.

Following the instructions for game creation in Fate Core, I started with the campaign issue aspects. The setting is a low fantasy, and Magic Wanes As Superstition Waxes. Spellcasters are rare, and keep a low profile lest they become the target of angry mobs.

The kingdom is in the grip of the Motley Coup. Nubbin, the court jester, was always erratic. Now madness grips him and spreads to the king’s men. The nobility are being rounded up for who knows what grisly end.

I’m also adding a genre aspect, Grim Realities And Bleak Outcomes. A genre aspect sets the tone for the world. It works like quest aspects from the Fate System Toolkit. It can be compelled to create grim complications and horrific situations. When it does so, all players get a fate point.

Next, we devise the faces and places. The important NPCs and locations relevant to the scenario. I’m adding Paralain and Nubbin: 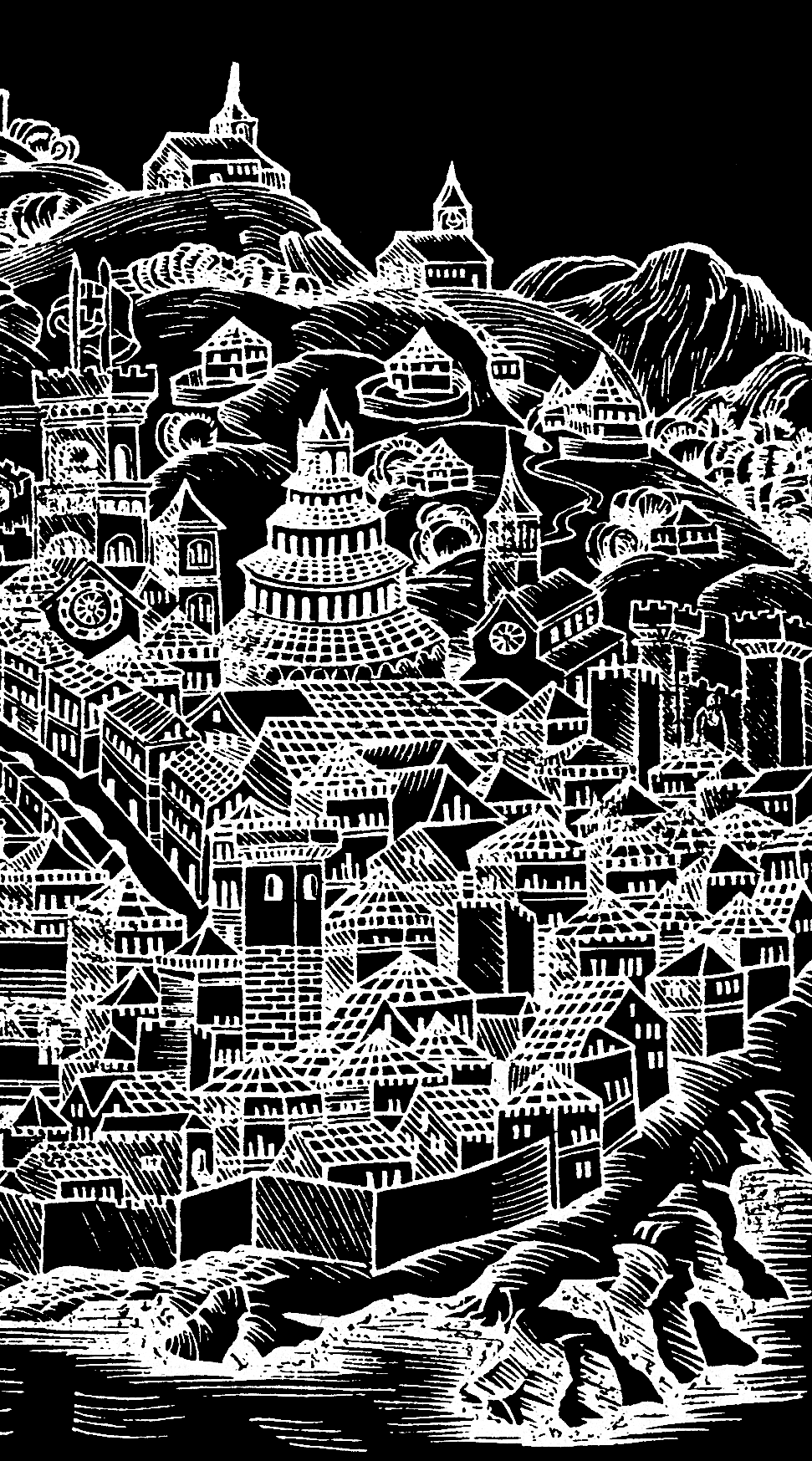 Public domain illustration of Genua from the Nuremberg Chronicle, 1493.

The city of Paralain is built on a tall, spire-like tor. Its Streets Are Steep And Buildings Precarious. Thieves Run Rampant on its streets, and beggars cry for alms at every street corner.

This Sadistic Jester is the prancing rabble-rouser of the Motley Coup. He wears a jester’s garb. It’s skin tight, as he is Oddly Ripped.

Next comes character creation. A couple notes first: I switched up the default skills for a fantasy setting. And I’m using the optional skill modes rule from the Fate System Toolkit. I’ll also be playing with my Gifts Extra. You can download my custom rules here.

This is a low-powered campaign, and skill are capped at Good (+3). I’m also using the rule for low-powered aspects, to make things as difficult as possible for my characters.

The hero (?) of our tale is the acerbic Princess Allayne, an indolent princess who spends her days and nights carousing in a most unladylike fashion. She has Leader Fair (+2) and Fighter Average (+1) as her roles.

Lothlorn is an elvish knight, banished from Faerie for a crime he can no longer recall. Cursed not to speak by the Tongue Tied Curse, he is sworn to protect Allayne. She is a princess, after all.

He has Fighter Fair (+2) and Gifted Average (+1) as his roles. His gift is Chicanery: his lies take on an illusionary life of their own. In addition, if he successfully hits with his silver sword he can create a free Average (+1) illusionary advantage. He starts the game with no fate points, using his Chicanery to hide his fey nature for the entire scenario.

Willan is a street catamite, who is Down And Out On His Luck. He’s tangentially a member of the group, having recently latched on Lothlorn.

He has Leader Fair (+2) and Knave Average (+1) as his roles. His stunt boosts his core skill: Provoke.

We start the game with a Chaos Factor of 5. Using the emulator, I make a roll to determine what happens in the next scene. I have a scene in mind, but I roll a 4 on a d10, below the current Chaos Factor. This means we get an interrupt scene:

The scene starts in the Fumble With The Maid Inn (or just The Fumble). The PCs are involved in a strange game of chance with the mysterious Saphraim.

I starts the scene with 3 fate points.

Saphraim
Let's raise the stakes, shall we?
Willan

Aye! What are the stakes?

Saphraim
An hour of your time, for one hundred crowns.

I compel Willan's Down And Out On His Luck aspect. Willan needs the coin. Badly. Despite the high stakes, he's willing to risk

Lothlorn rolls Average (+1). I roll Terrible (-2) for Saphraim. He spends a fate point to invoke the Noisy and Distracting aspect for a +2. With Deceive Good (+2), Saphraim's result is Fair (+2).

Lothlorn attempts to discern if Saphraim has a tell. This is an opposed to check to Create Advantage for Tell. He fails, and is much disturbed that Saphraim remains impervious to his acute, fey senses. There must be more to her than meets the eye...

I roll Good (+2). He spends another fate point to invoke Noisy and Distracting for a +2. With Deceive Good (+2), Saphraim's result is Fantastic (+6).

Saphraim succeeds with style, so I determine Willan takes a 2 shift hit to his mental track. He uses a mental stress slot to absorb 1 shift, and takes the Disturbed mild consequence.

Willan plays a hand, but loses. He now owes Saphraim one hour of his time... no doubt a price more deer than it first seems. Willan seems shaken at the prospect.

I end the scene here. As the results seem ambiguous, I increase the Chaos Factor.

I intended for Nubbin to burst into the inn in the next scene and start a brawl. But I roll a 1 against the Chaos Factor: it's odd, so I make a scene alteration. I roll on the emulator event table. The alteration is NPC action. For prompts, I roll Disrupt Power on the event meaning table, and interpret this as Nubbin sneaking up on the PCs, rather than bursting in.

Taste of Blood Stunt: Gain an extra shift harm on your first hit in combat.

Suddenly, Allayne feels a hand slap on her shoulder. She turns around to see Nubbin, with a retinue of king's men.

Lothlorn rolls Fair (+1) to Create Advantage. He adds Provoke Fair(+2) for a result of Great (+3). The King's Men roll Poor (-1). I invoke their Bloodlust aspect, for a total of Average (+1). Lothlorn wins, and creates the advantage Hesitant for the King's Men.

You are cordially invited to dinner, princess.

Lothlorn successfully intimidates the king's men. They take a couple of steps back, leaving an opening for Lothlorn.

Lothlorn rolls Mediocre (0) and adds Fight Good (+2) and +2 for his free invoke, for a score of Great (+4). The man he's targeting rolls a Poor (-1) and adds his Fight Fair (+2), for a total of Average (+1). A success with style! Lothlorn takes out his opponent, and gains a boost, Blocking Allayne.

Combat begins. Since Lothlorn has the surprise, he goes first. He rolls Good (+2). With his Fight Good (+2) and free invoke of his boost, this gives a result of Fantastic (+6). Nubbin rolls Average (+1). He uses his stunt, which allows him to substitute his Provoke Good (+3) for Fight in combat. I also invoke his Oddly Ripped aspect, for a total of Fantastic (+6).

It's a tie! I decide it's a success with minor cost: no damage, but Lothlorn gains a boost against Nubbin: Off Foot.

Lothlorn hands off to Allayne, and then Willan, in the exchange. They both try to create the advantage Behind Cover. The difficult is set at Average (+1). Willan rolls Average (+1) and adds his Athletics Average (+1) for a success. Similarly, Allayne rolls Fair (+2) and succeeds too.

The exchange must be handed over to the king's men now. They all attack, two on Lothlorn and one each on Allayne and Willan:

Rather than leave it there, however, I offer Lothlorn a compel on his Sworn To Protect Allayne aspect. Fearing for Allayne's life, Lothlorn takes no chances and attacks. He shoves one of the king's men, knocking them into a table. They take the hit hard, and go down. With the advantage, he manoeuvrers to shield Allayne.

Nubbin
Stand down!
Allayne
What is the meaning of this?
Willan
Ayup.
Lothlorn
slashes his silver sword at Nubbin.
Nubbin

smiles horribly, a look of such mischievous malevolence that Lothlorn hesitates for a second too long.

Lothlorn
mimes that Allayne should make her escape.

I compel Lothlorn's Tongue-Tied Curse trouble aspect here (he needs the fate points). In the frenzy, Allayne misses his gesture.

stumbles, as he is pushed back.

Lothlorn dodges it, taking a shallow slash to his arm. Meanwhile, Willan seizes the distraction to pick up a chair and throw it through the window, to create the advantage Handy Exit. It is a trivial thing to do, and Willan easily succeeds with success. He takes out the window and some of the poorly constructed wall.

Willan
jumps through the window into the alleyway outside
Allayne

Save your princess, drunken curs!

she commands the tavern patrons

Allayne creates the Someone Is Always A Hero advantage using one of the free invokes from the Handy Exit aspect, and her Noblisse Oblige stunt. Given the drunken and indifferent nature of the knaves inhabiting the Fumble, the difficulty is set at Good (+3). With the invoke, she succeeds with Great (+4)... just. The patrons surround Nubbin and his men, delaying their pursuit.

he throws crate at window to block exit

The difficulty for this is set at Fair (+2) and Lothlorn rolls Fair (+2): a success at cost. Instead of blocking the door, the crate goes through the opening towards Nubbin. He creates the boost Crate Flies at Nubbin's Head.

frantically looks around for an escape route

Allayne rolls Poor (-1) and uses the free invoke from Someone Is Always A Hero: Nubbin is preoccupied pushing away knaves and whores and rolls Terrible (-2). Even with his Notice Average (+1) he misses where Allayne looks... she creates the Alleyway Escape Route.

Seeking to prolong the scene even more, I attempt to compel Willan's Down And Out On My Luck trouble, but Willan spends a fate point to avoid this.

Willan
throws a dagger at one of the pursuing king's men.

It's a bold attempt, and he uses the free invoke from Someone Is Always A Hero. A patron attempts to hold the target. But Willan rolls terribly.

elbows patron in the face.

Outside, Lothlorn attempts to use his Chicanery gift. He attempts to create the illusion of the party running in the opposite direction.

Lothlorn
gestures wildly down the street, then turns in the other direction.

However, I compel the Magic Wanes As Superstition Waxes genre aspect. Lothlorn accepts: the illusion fails, and Lothlorn becomes confused as he sees illusions of the party running in every direction.

The party concede the fight: they escape, but Lothlorn leaves a Trail Of Blood in his wake.