This is a response to Josh’s article on Hexcrawl Dashboards. In that post, he explains how GMs could streamline their games by putting together a dashboard: a custom webpage that composes maps, random tables, etc. into one screen.

It’s one of those “wish I’d thought of that” ideas. And it got me thinking. You could do this without having to mess around with HTML. Just using regular desktop apps and features.

So, here’s an example I put together for a play-by-chat game: 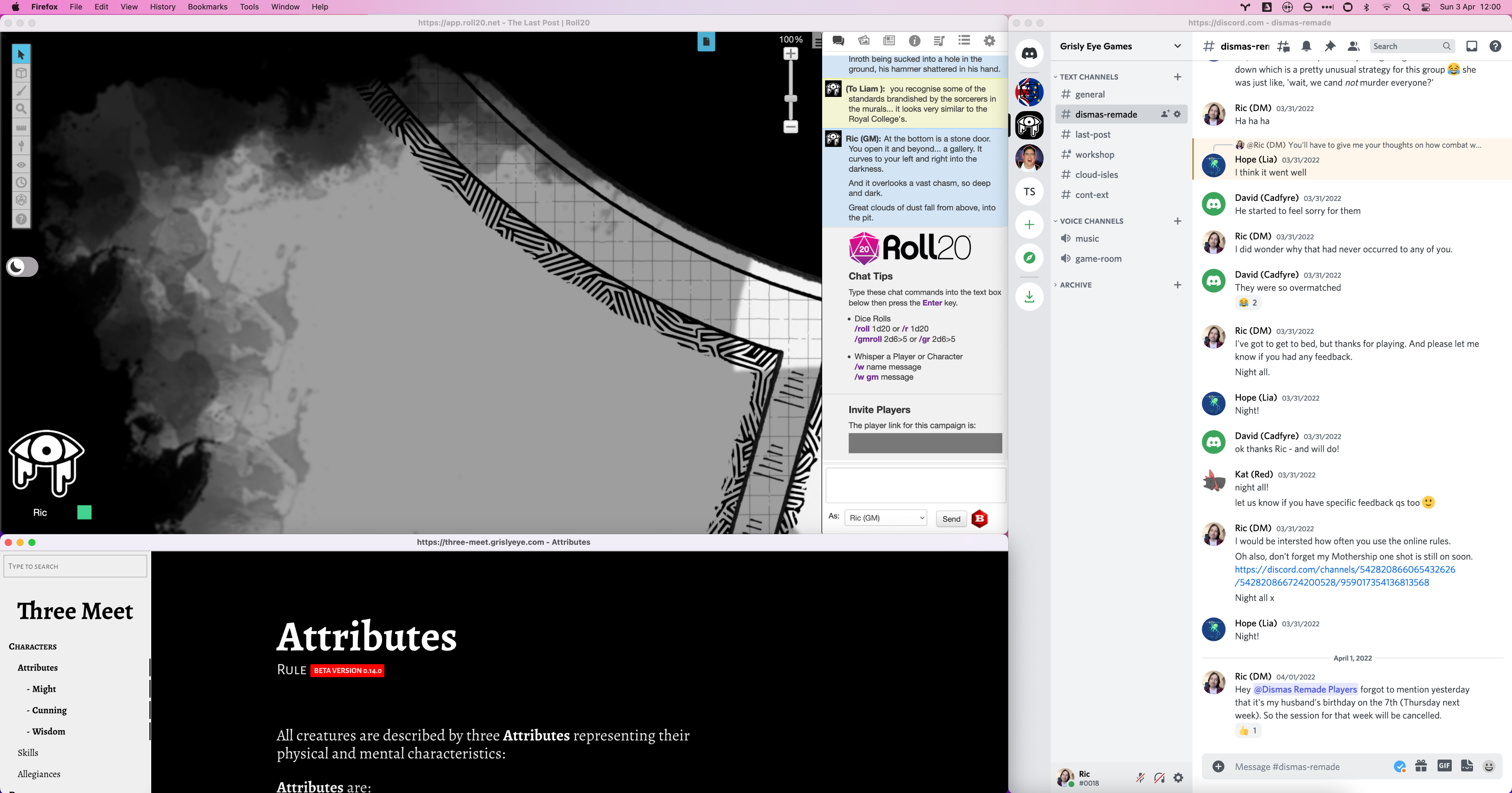 Instead of a web page, I’ve used tiling: a standard OS feature which allows you to automatically arrange your desktop windows. As you can see here, the top-left is for my Roll20 game and the right-hand is for Discord. (It's critical I monitor both). And finally, I have a window for reference documents at the bottom of the screen. (In this case, for rules).

I’m fortunate enough to have a large (27-inch) monitor to stretch out on. So I'm not sure how this would work for smaller screens, and it's probably useless for laptops.

I found the following useful:

There is always an issue

During play, I'll need a lot more than just VTT, chat, and rules. I have notes, useful random tables, and so on. And even with my large monitor, a tiled desktop gets cluttered with more than three windows: 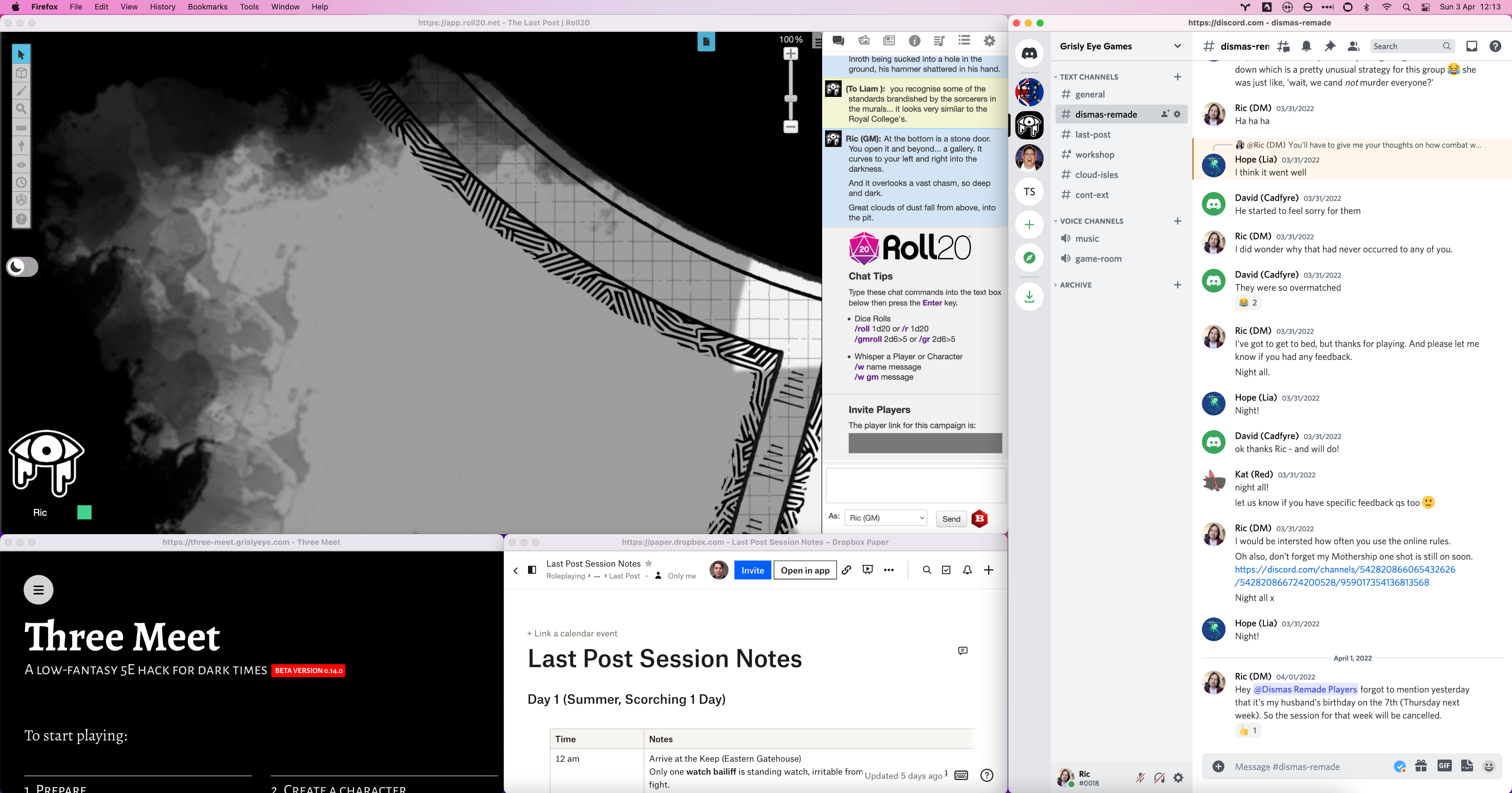 One solution is to lean into your VTT. A lot of reference material (player handouts, illustrations, setting lore, NPCs, etc.) can be stored in Roll20. But it means siloing a lot of important material in the clunky Roll20 interface.

Desktop apps can also come to the rescue. macOS has a fantastic built-in note app that sits discreetly at the corner of your screen. It opens a floating rich-text editor, and you can quickly search for notes with Spotlight.

Discord also has a number of useful bots that can streamline your games and save precious screen real estate.

Chartopia is a random table hosting site with a bot (in beta) that allows you to roll tables in chat. Again, it means dumping material into (yet another) silo. And, unfortunately, there’s no equivalent for perchance.org yet.

Then there is the Avrae bot, which lets you search D&D rules. However, chat-search can be clunky and reading rules from a busy chat channel is only usable in a pinch. I often find myself just pulling books off my shelves.

Avrae does have a number of other features which can come in useful for non-D&D games. Such as the ability to script dice rolls. I used it to create a custom dice roller for Fate, for example. And I'm sure there's much more you can do.

With lots of bots, typing out long Discord commands gets annoying. I need to write 12s! roll 45849 --set Season=Spring just to roll on my weather table, for example. Fortunately, the Custom Commands bot allows you to create shortcuts for complicated commands like these:

And I’m sure there are other Discord bots out there that can streamline your workflows.

To be honest, this is probably as complicated, if not more so, than just slapping together some HTML. There's so much information a GM needs at their fingertips that 3-4 windows just won't cut it. At least, not without a lot of hacking around with Discord bots.

The reluctant alternative is to rely more heavily on VTTs. Reluctant, because of the mixed quality in the VTT landscape. (Looking at you, Roll20)

But I still feel there's a lot the humble desktop can do, perhaps with a bit of thinking around the subject. So, I'm off to experiment...