Public domain illustration of Genua from the Nuremberg Chronicle, 1493.

If you think about it, most cities are pretty samey. A big river running through the middle. Rich and poor. Noise. Homelessness. Bustle and shops. Buses and suburbs. And so on. The customs, culture and weather might change, but city-life is city-life pretty much wherever you go.

Anyway, here are some observations about writing and playing fantasy cities. How do you do it? How do you make it all up?

I live in the greatest city in the world. Which, as we all know, is London. But when I try to sum up London, I struggle.

London is a city of contrasts, I guess.

The point is cities aren’t one thing. They’re too big and complex to sum up. We experience parts. Sometimes these parts overlap. Sometimes they contradict. Sometime they conflict. Some are introverted. Some expansive. And some just never meet.

You can’t experience an entire city. Ergo, you can’t capture its entirety in fiction.

Are you in Beszel or Ul Qoma?
…Neither. I’m in Breach. The City & The City by China Miéville

First observation: don't detail every part of a city. Define what your characters need, sketch the rest.

Your characters might blunder through the slums, might be drawn into the machinations of the nobility. So you focus on the shanty town known as "The Crows". And the corrupt scions of House Barrosa.

You might only mention the industrious craftsmen who dwell beyond Cemetery Hill. Or outline the fractious trade guilds.

Regardless, gamemasters are well advised against over-preparation. Minimal preparation also conveys the vastness and complexity of the city. There are parts the characters might never see, the mere mention of which might daunt them. Cunningly drawing your players in.

He had noticed that events were cowards: they didn't occur singly, but instead they would run in packs and leap out at him all at once. Neverwhere by Neil Gaiman

Second observation: capture the city's diversity. Not just diversity of peoples, but unexpected glimpses of its parts, cultures, hidden places. Just when your characters think they know the city, something unanticipated should intrude.

In RPGs this can be handled using good, old-fashioned random encounter tables. Instead of monsters, they encounter strange travellers, parades, tragedies, forgotten alleyways and NPCs preoccupied with their own concerns.

Not only do you want the city to have depth, and feel alive. The characters should also have a sense that they're not the centre of things. The city revolves regardless, even in the middle of whatever crisis they're embroiled in.

Public domain illustration of Frankreich from the Nuremberg Chronicle, 1493.

I will follow the tramlines. I will stalk in their shadows as they pass by over houses and towers and barracks and offices and prisons of the city, I will track them from the arches that anchor them to the earth. I must find my way in. Perdido Street Station by China Miéville

I always imagine London as a great tower. Each day I wake up in the suburbs (the ground floor of the analogy) and make the difficult ascent to the town proper (the pent-house, where all the interesting stuff is). It's a climb. You must negotiate many steps, avoid hazards and delays.

That is to say: there is a centre (sometimes more than one) with all the stuff, and dense areas between that must be navigated.

In this way a city very much resembles a dungeon. It has its prizes, its dangers, its helpers and its puzzles. Its streets and rivers are corridors, its buildings and districts are rooms.

Of course, it is also unlike a dungeon. The stakes are lower. It's safer, or at least safer than a monster-filled crypt. Water and food are widely available. Etc.

Pathcrawls are useful for labyrinthine cities. The ancient city of Dismas is the main stage of play in my long-running Black Griffin campaign. And pathcrawls have been used to great effect.

To demonstrate, I've overlaid the player's map with a hidden graph of the main through-ways: 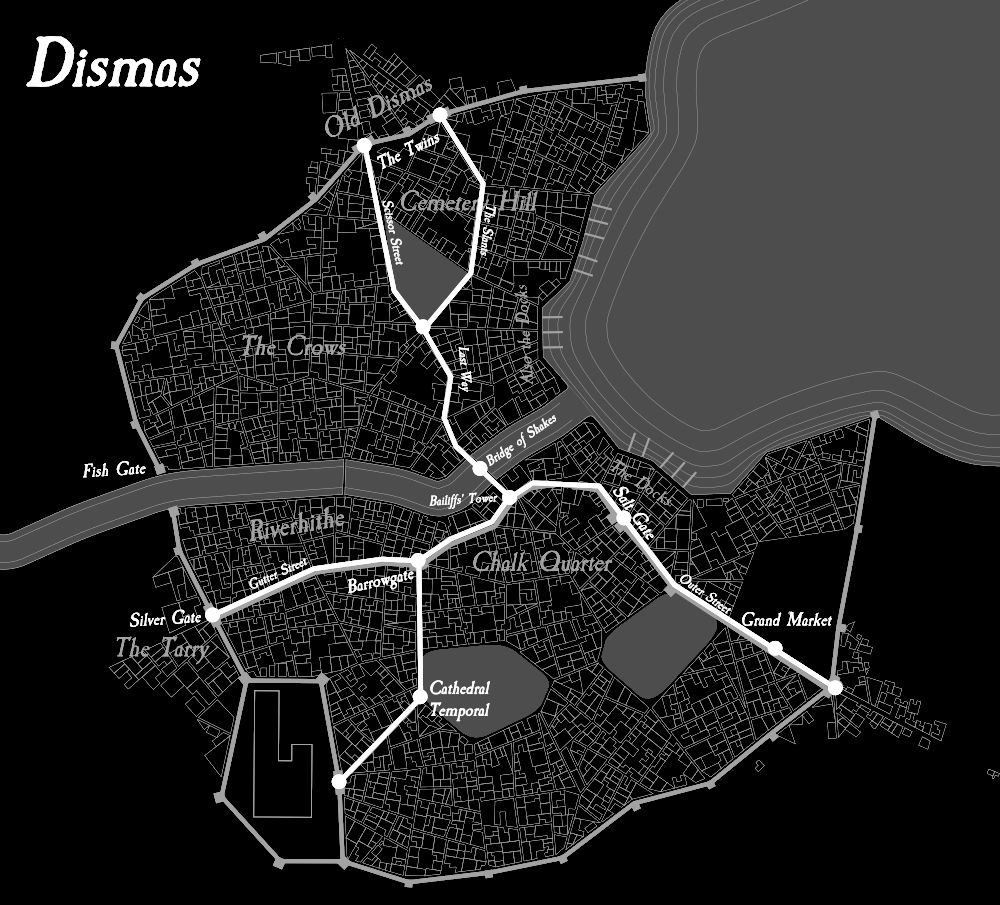 There are areas of improvement I'm considering: a more complicated, perhaps even bewildering network of streets. Nested pathcrawls, so you can drill down into important district.

I'm rebooting the campaign so I may get the time to work on these.

Each path represents a major route, each node a significant landmark. Players can navigate with simple choices (just like a dungeon). Left or right? Across the bridge or along the river? Or they could cut through back streets, increasing the chances of random encounters.

Paths have different challenges. Gutter Street has regular patrols, which dubious adventurers might want to avoid. Fish Gate is a great way to sneak into the city... provided you pay the right bribes.

The city becomes a rambling obstacle. Adding memorable landmarks (the Bridge of Shudders is especially popular) gives the players a chance to recall routes. And a way of introducing important locations. While retaining the Glimpsed City.

Players gain a rough idea of how to get about. Yet there is always a nagging uncertainty. Is this the best route? Do we remember they correct way? Where was that tavern again?

You probably don't want to bog down play with constant street rambles, though. If the players have a good idea where they're going, I don't make them pathcrawl. If they don't, or are under time constraints, a pathcrawl raises the tension.

Anyway, that's all I have to say on the matter for now.